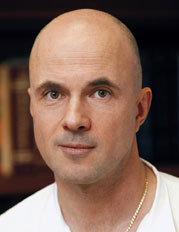 Dr. Gersak is Chief of Department of Cardiovascular Surgery at University Medical Centre Ljubljana. He graduated Ljubljana Medical School in 1983 and later he practiced Cardiovascular and Cardiothoracic surgery in Switzerland, Canada and USA. Dr. Gersak performed the first total endoscopic aortic valve replacement in history. Also, in 2010, a team lead by him performed the first robotic operation at the femoral vasculature, at the University Medical Centre Ljubljana. The robot used was the first true robot, meaning it was not simply mirroring the movement of human hands, but was guided by pressing on buttons.